First off, I'd just like to thank you for reading Thursday's review today. I know this site has been absolutely swamped with reviews this week and so it's easy to get lost, so thanks for making the effort to wade through them all to find it…*cough*.

You'll be pleased to here that Dave is feeling a lot better than yesterday - aww bless - and Chris is feeling tired, which is a shock to us all. If he has been tired before since he started breakfast, he has certainly hidden it very well. His driver asked him what time he went to bed and if it was early or not, which resulted in a rather weird conversation between them consisting of the psychology of sleep. However, as Chris rightly pointed out, if he had truly been interested in psychology then he wouldn't be driving him to work at 5:30 in the morning.

Quite an argument unfolded after the 7:00 news, as Dom made a sporadic hand gesture. He intended it to be a gesture to tell Chris to play the "One Road Travel" jingle, but since that doesn't usually occur until half past the hour, much micky-taking was distributed by Chris. This caused Dom to claim, instead that he was in fact a human compass pointing to the north.

This, strangely, lead to Dave himself claiming he was in fact a real life human compass, by telling Chris where he thought North lay in relation to the studio and the building. Of course, in typical Moyles show style, nobody could agree where that actually was, with Dave claiming that if you "just went up the road, then you would be heading north". This wasn't enough for Chris, as he wanted to know what exact direction Oxford Road was. Nobody actually cared about this, you must understand, as Chris himself commented "do you think people will notice that we don't have much material for the show", which is true, as proven by the rather dull and shorter than usual review!

Dave later got a map out to prove his point, saying "this is where we are, I'm shocked that you are all so stupid". However this really didn't prove his point at all, since he didn't bother to expand any further on this. Chris however, descended the debate by just drawing all over the map and saying that the drawings didn't exist in real life or something. Dave had the last laugh though, by proclaiming that Chris can't even fins his way home without Sat Nav!

Chris went out the other day and came back to find what he thought was a screwed up bin bag on his doorstep when he came home. Upon further inspection though, he discovered that there was a cat inside the bag which had been abandoned, rather than a present from Santa's sack as she suggested. The cat saw Chris and immediately ran off. A bit weird, but in the end Chris didn't think much about it and went to sleep.

The next day the exact same thing happened, the cat was asleep on the step and it saw Chris and ran off again. He had tried to gather advice from his parents and his girlfriend, but they all said the same thing - that it would be wild and it would be best to stay well clear of the cat in case it attacked or something. Plus, if you start giving it loads of attention it will start to come back and maybe bring loads of mates as well. Dave said it was nothing to do with Chris showing the cat love, but the fact it was sheltered. Chris wondered if he should build it a shelter, which the team thought would be nice, but everyone else advised against it.

Dave also had a cat related story, saying he has heard cat noises on the past few mornings that he has gone out to work. However on these occasions, despite clearly hearing a cat noise, he hasn't seen hard evidence of a cat actually existing. He has started wondering if he is going mad like Jason Orange and hearing cat voices in his head instead of human ones. Either way, all these cat related stories are very weird. Chris thinks all the cats have had a secret meeting and are trying to freak us all out over the next few months slowly but surely. Stranger things have happened. 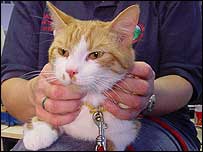 (*) Chris thinks the "One For Christmas" BBC1 comedy trail isn't very funny, and is surprised that Jonathan Ross even put his name to it, since it is just his reactions to clips from programmes. The reactions are about as funny as the clips themselves, ie not much.

(*) Space Cadets is really odd, seems to be the final view of the team, and I have to say I agree. They want to know what has happened to half of the team which have just disappeared for no reason. Dom says they have gone into a Big Cupboard, and we'll see later. There is also a spin off show called Big Cupboard's little cupboard.

(*) Longman chat after they played the new Will Young track. He loves Will Young apparently, and Chris thinks he's turning…

(*) Aled's in a bad mood, but he shouldn't be really as he had two big, almost, life changing events. Firstly he recorded some lines for a radio soap, which he said was harder than he thought it would be. Plus he met another of his idols, queen of pop Madonna, when she came in to meet Jo Whiley.

Chris is going for a slap up Christmas lunch with the team and the boss and will be recording some more secret stuff with Aled.

Everyone else is going to the lunch too. Brilliant! Also, Rachel will be going to the Channel 4 News Xmas Party. Perhaps Jon Snow will be there, since its Christmas!

Joce will be doing Karaoke.

<a href="http://chris.polymathic.net/phpBB2/viewtopic.php?t=10955">>Thursday 15th December- What did you think of this show/review. Post your comments here<</a>