It’s 6:55, and after a burst of Robbie Williams, JK & Joel are still on the air talking about the previous track and how much they like it. But they shouldn’t be on at this time – it’s time for Chris to come on and entertain the nation with his witty banter etc. Wait. It is Chris with another entirely accurate impression of those cheeky chappies. Dave thinks it sounds a bit “like that guy of Police Academy” which I have never seen, so I’ll just have to take his word for it. Apparently Joel has a silly voice in real life as well, and sounds like a very annoying car starting. This is also why JK lives about 200 miles away from Joel in real life.

However, this lead to an e-mail from a possibly fake name – since the one they signed off with was different to the one in the subject line – about JK & Joel being bullied by Chris. They asked if Chris had been bullied at school and to remember the incident in the news this week about a girl committing suicide after being bullied – which as Chris said has nothing to do with him. It’s just a bit of fun and as Chris points out JK & Joel were hired specifically so Chris and Dave could have something to talk about at the start of every show if they were low on material (which, lets face it, is often). They also said Chris should stop talking about drinking and swearing, both of which he hadn’t done at this point in the show (although it was only 7:05), so that was another thing that was incorrect. Still, bullying is wrong kids. Don’t do it.

Dom met Sarah Jessica Parker…as I just told you in the title. Aled was in especially early – again not because he had wet the bed, but because he wanted to hear all about this actress who had appeared in his favourite show ever © Sex and the city.

Dom said she looked beautiful, which you can see evidently in the picture below. I’m more a fan of beardless Dom myself). She was in town to promote her new film called the family stone, all about a family called ‘The Stones’. Simple eh? It’s Christmassy as well, and Dom said it was really funny, but really sad as well. SJP (as she will be reffered to from this point onwards) was obsessed with food throughout this interview. Her opening statement was her telling Dom what she had for lunch. He didn’t ask, she just blurted it out. How bloody rude of her. She had a chop and some bubble and squeek which was “lovleh” – said in her very impressive Northen England accent.

At this point Aled was at the edge of his seat in excitement, and who wouldn’t be after Dom just called her a pig twice in as many minutes – the second was during some riveting talk about olives, which of course is keeping with the food theme. After declining the offer of Christmas drinks and food, she had a very very special message for one of the team. Naturally Aled was whipped into a frenzy by this, and the message turned out to be for Chris himself (after playing a record to make Aled wait). There was a message for Aled as well, but hilariously she sounded much less interested in him! Dom always does better interviews than Chris, in my opinion, since he doesn’t flirt with the guests so much. To be fair to Chris though, Dom’s interviews are edited, but today’s was better than I expected anyway.

(*) Dave wonders if they have to provide loads of biscuits and buns for free if people have spread the word about the show – like the popular jingle says. Rachel things they should have a Chris Moyles coffee morning at various BBC centres across the country.

(*) Another *yawn* Sting ring. Still, the last one ever tomorrow. Cause for celebration methinks.

(*) GBOB took place last night – which I’m sure you are all aware stands for ‘Global Battle Of the Bands’ – and Chris went to it. Dom couldn’t find anything on the newsbeat server about it, despite it being an absolutely massive event. Chris’s cousin was in it, after winning the Ireland heat and they only went and bloody won it. The prize is to tour around the world and loads of money. Technically they are the best band in the world now then, technically.

(*) Sports Personality of the Year give away, which was so-so. Carrie is one of the judges, which is quite an achievement. Well done Carrie. 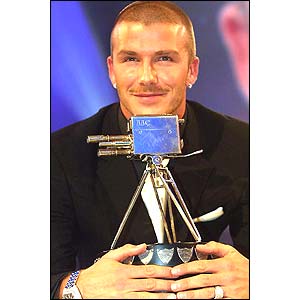 Freak Power Turn On Tune In Cop Out - Freak Power scored a top 3 hit with “Turn On Tune In Cop Out” when it was re released in the year 1995 - 1995 was the year that Everton won the FA Cup with a victory over the hapless Manchester United - Manchester United were once again embarrassed last night when they were knocked out of Europe, after a disappointing defeat in Portugal - Portugal is a nice place to go on holiday, as are the Canaries - Canaries were traditionally used by miners to test for gas underground - “Underground” was a 1996 hit for the fantastic Ben Folds Five - Five is exactly half of ten, which is the amount of years that make up a decade - “Decade” was the title of the Greatest Hits album from Duran Duran, which featured amongst others the “Union of The Snake” - The plural of snake is “snakes”, which are often found in hot places like Africa, Australia or Mexico - Mexico is a major producer of tequila - and “Tequila” was a big hit in 1999 for Terrorvision - Which links us to Terrorvision and Tequila

Chris is going to try and palm his parents off on his brother today so he can play his X-Box.

Dave is going to visit his mother, but the big news is that his washing machine is fixed. No such luck for Rachel though. Carrie is catching up on sleep, and Dom is going to start his Christmas shopping.

Aled is meeting his boyfriends best friend, and Joce is meeting her lady friends for some Christmas fun.

<a href="http://chrismoyles.co.uk/phpBB2/viewtopic.php?t=10919">>Thursday 8th December– What did you think of this show/review. Post your comments here<</a>