Another 2 weeks with Mills is over and a regular service was resumed this morning as Chris took to the airwaves once again. To celebrate a 2 month drought of reviews is also over – although I cannot promise that it wont be another 2 month wait until the next one comes along.

An extremely rousing “Gooooooooood morning” starts the show off, one which we wouldn’t normally expect, as we are so used to hearing a more downbeat “You won’t believe how tired me and the team are today”, so it’s clear that the team have had a long and effective rest. Dave certainly thinks so, as he feels as if he’s been away for months. Some people who aren’t fans of Mills would tend to agree. So it was good to hear that first handover with JK & Joel, some of which have been classic Moyles in the past few months. Dave wanted to know how they were, to which JK (or Joel, I still can’t tell which is which) proclaimed that he “had an abscess on his tooth and [is] going to burst it in a moment”. A bit too much information at that time in a morning, as Dave points out he wanted information on “how they are generally” rather than a medical rundown.

JK & Joel are both glad that things are back to normal and they have returned to their normal shift as there is less pressure and they get to hang out with Chris and co. “Nobody’s as pleased as the audience” adds Chris and although this is appears to be a jolly jibe, he does have a point behind this, as he states that audience appreciate a pairing that has risen through the ranks at various radio stations doing all sorts of shows, instead of a guy who reviews movies…which is true for me at least, I’m not fond of James King (who filled in for JK & Joel on early breakfast for the past 2 weeks) and his presenting style as a DJ. His movie reviews are alright though.

Chris has the “Ultimate” Guess Who

Chris went to Portugal on his holiday, the delights of which included him attending a water park where there were more “English people than in the whole of England”, which I find hard to believe. They all called him “Moylesy” as well which he hates. By utter coincidence, Chris saw loads of celebrities as well, from which he got what he claimed was one of the best ever guess who’s. When such stars as Mike Baldwin were turned down from being used in the game, you would assume it was big.

But why was Chris seeing all of these celebs? Well it was because by a strange twist of fate, when Chris was over there, there was a celebrity golf tournament, held by David Seamen and his wife. Since he was there anyway, and of course being a major player in the world of this business we call show himself, Chris was invited along for some tea and some dinner. Chris admitted there was quite a range of the most random celebrities most likely since “Celebrity Wrestling”. Such was his astonishment at the range of people there that when the time came for a photo call, Chris chose not to be in the photo, and not necessarily because he wasn’t playing golf – although admittedly it is hard to pass up an opportunity to be in the same photo as Bradley Walsh, Willie Thorne, Dane Bowers, one of the Nolan sisters and the fat one who used to be in Brookside. “It was like a weird panto” he commented. But what a panto, eh?! 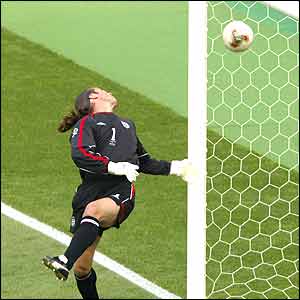 Dave went first though, as he also had a guess who but feared that it wasn’t good enough to match up to Chris’s ultimate one which was coming up later. It was a footballer, so Rachel didn’t even join in. Steve McManaman was the answer, even if the team can’t say it properly. Let’s face it, I can’t even type it properly. Chris was sure that his was going to blow Dave’s out of the water, even if he didn’t know the full facts of the matter. Turns out it was Russ Abbott. For someone like me this was hardly as spectacular as Chris was making out although I think that could well be due to the age difference – especially as all the team were extremely impressed.

Sorry to get your hopes up. All it actually was the first text poll of the new run, asking listeners to text in if they are happy to have the team back (which by the fact that they are listening surely proves they are and thus the poll is slightly flawed), or if they are already missing, as Chris puts it “the inane banter of Scott Mills and those pre-recorded set up phone calls”. Hmm, wonder what will win then?

Chris: Let’s start as we mean to go on

One of the first texts that came in in response to the poll told Chris to “get off his fat egotistical ass”. Chris wasn’t one to let insults like that get to him though, his only reply “by the way, I put weight on over the break and my book is out in October”. Nice.

67% were in Chris’s favour after the first half hour of texting, which Aled agreed with. Dave didn’t as he’d still be on holiday! An hour later that fell to 62% and Dave said if it goes below 50 they should end it, but Chris suggested if that happens they should walk out. This lead to a conversation about if that actually happened and what the emergency links sound like – Rachel thought most would be Germany related incase contact went down during the world cup and there were few generic ones. Chris ended the voting when only 47% were glad they were back.

We got a mention! Chris was talking about the thread, which you can check out <a href="http://chrismoyles.co.uk/phpBB2/viewtopic.php?t=12705">>here<</a>, where we were talking about weather he had finished his book or not. He was pleased to announce that he has indeed finished the book technically, even though his old editor walked out on him as he wrote about them in the book, so look out for that in October. You would never know we got a mention though as there wasn’t a visible influx of newbies or forum hits this time!

Chris is going to get it checked out today to see if they like what he’s written then changes accordingly. Don’t forget your old buddies here at Chrismoyles.net now will you Chris?!

Dave said he’ll probably not buy the book, and just get the Audio CD, which Chris himself is reading. However he’d rather download it than buy it. Problem is he doesn’t have the internet yet, and as Dom cleverly pointed out he can’t download it on Word.

Later on Chris mentioned us again as we were moaning about the features and how some people say they should get some new ones, and then proceeded to play some clips in their data bank to see if they were still funny. “I Love Horses” is of course still funny, as is Dave snoring (although Dave didn’t think so) and Dom’s Jade impression as well as countless other impression. “Boobs is what they want” made a welcome return as did the Britney fans complaining at her premiere.

(*) Patsy Kensit and Lilly Allen have both declared their love for Chris in the papers during the two weeks the team was away. Of course, Chris loved the compliments, but he was slight worried that Lilly put him in the same bracket of men as Peter Crouch. Carrie suggested the two should have a “robot dance off” to see who would win her heart.

(*) A funny text came in about Dom. One of the listeners had been sitting on a beach near him and his family recently and heard him threatening his son with “the naughty step”, of Supernanny fame because he wouldn’t stand up.

(*) This week’s “6 weeks of summer” destination was exclusively revealed this morning, and defiantly wasn’t revealed weeks ago in a press release. This week you can go to Global Gathering with Coxy. To celebrate there was a phone call from the lady herself. Coxy back at breakfast – you can just feel the Rajas tumbling as she spoke.

(*) Celebrity Tarzan was back once again, with the same voice from before the holiday rolled over for a record breaking 26th day. The caller guessed Jonathan Ross, which it sadly wasn’t and so it rolls over to another day. Interestingly after Aled on our very own forums said Beep Beep Busters was being rested for the last quarter due to so many things like X-factor and the world cup going on, it didn’t return today. Will it ever return? Only time will tell…probably not though.

(*) Talk of the new Robbie Williams record is splitting the nation, so as usual Chris has his say, and he doesn’t mind and much like Scott Mills thinks it’s a grower. However what he doesn’t like is the new Justin Timberlake record and thinks it’s a case of Emperor’s New Clothes. Now weather you agree or not, this is one of the reason’s you have to love Chris – speaking out when a dodgy record from a supposedly top artist comes out. Most other Radio 1 djs would just kiss ass. To provide balance though it must be said Aled really does like the new JT song. So there.

That’s it for today’s review. A very good return indeed, lots of the banter we all love. I may well be back later in the week, but don’t hold your breath. In the mean time if you want to do some reviews yourself then enquire on the messageboard in the topic below – let’s face it we need some!

<a href="http://chrismoyles.co.uk/phpBB2/viewtopic.php?t=12713">>Monday 24th July– What did you think of this show/review. Post your comments here<</a>