A cheeky git remark from Wogan placed on top of the national anthem to start this, the first Friday of the new season.


‘A long line of presenters and she first went over to radio 1 and I must say full marks for pretending to know who they were.’ - Terry Wogan, Radio 2. 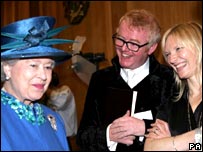 The talk then takes a sour turn as a reverbed Fearne is brought back into mic to let Dave learn a new slang word for gay. Luckily as this was pre-watershed (pre 7am) it gives Chris enough reason to bring in his way when talking about the gays, and gives men across the nation the image of Fearne Cotton turning gay. Unfortunately this talk then takes a turn for the worse when talk turns to a more childish speak for the audience up at this time, little children, as they talk about drawing. Chris ends up drawing a 'Pee Wee Urban' and finally Jo Whiley's on Fearne on TOTP this week, so fall back to sleep with that in your mind as Dom brings the news.

Back From The Queen

The show is restarted with the same audio clip as to start before the news, and Chris although completely bored about the subject, tells stories for the next half hour. From this half hour we find out:
1) The queen tends not to listen to Radio 2
2) The queen wants funny.

After having the salaries leaked to the press during the last month, Chris then goes on to explain how all the radio stations were lined up and how they wanted them in a paticular order. In other words a way for Chris to sub-consciously to have a go at the fact that himself, Terry and the Evans were going to be put at the end. Anyway, this is all dribble, but this is what you get from Chris when his ego's been depressed by meeting the Queen.

'I didn't know Chris was a dairy farmer, as he can milk it like a gudden' - Unnamed Texter.

A vote to deciede who to give the tickets away to today and so it goes 3-2 in Chelsea's favour so the team give away Liverpool tickets on the flip of a coin. 08700 100 100 - Who do you think will win out of Chelsea and Liverpool? (Liverpool fans only). And to round off the first slot for the 4th time this week the 7:30 news arrives late. Talking abouth the news as the new England anthem has its third ever play today, first ever radio play it's time to - 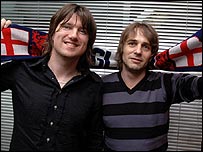 Day 2 - Dr who alarm clock, Wind up DIGITAL radio, and the take that DVD. Less than 3 words should sum up this escapade but I'm afraid I can't. Louise thinks today's Celebrity Tarzan is David Tennant and wooo it's wrong. I mean its not as if it needs twenty minutes each morning. They seem to have dropped CPC but kept the annoying features such as the pub quiz and CT.

The official world cup song gets a first 'radio' play today but everyone seems to hate it - third complete play. Whilst watching the TV, there is a Bristol lot listening to Radio 1, listening live to the 'first play' - It's A Lot Slow. Chris realises its being slagged off on air so Chris interjects his own commentry ontop the BBC News playing. Rather being able to take a view on the song, Chris is needing to move to the left and right of the song by firstly discussing the video, followed after the news by talking about timpani. Aleds challenge is set to run outside for the review of the England song to shout 'I love it', however he lets the team down, or so they think, but Aled gets hold of a small sound that sounds like Aled for the £100. Danny comes back into the studio for more of a chat during the non-ramble to chat about more random topics spinning off, he'll be late for Ken Bruce. Following on, the ramble which starts at 9:09, consists of Aleds second challenge of the day - as the texts are not greatly happy with the official England song - to create his own England song. The first clip was played at exactly 9:28.

Chris Strips somewhere between: 8 and 8:30. For the podcast Chris realised he needed to listen to Mucky Lamb, Lucky Man in a Chris Moyles stylee. Unfortunatly it still couldn't be on the podcast but why waste it. And to fill the last few minutes 'Heavy Hit After Heavy Hit'.