So unless you were living on another planet for the last month (and even there you'd know about it) - it was the finals of One Night With Laura for the first week. Scott and his fellow judges had whittled the potential boyfriends down to four - Shep, James, Ben and Gareth. First to go on the Monday was James, who was voted off after the first public vote. Then it all went Pete Tong when a girl called Christine got in touch with the show to say that Shep had been seeing her during the competition. He'd even booked a holiday. But to cut the long story short Shep claimed that she wasn't really his girlfriend but someone that was just close to him. But was he lying? To find out Scott brought it in a man that looked like Fred off of Corrie with his trusty lie detector. Turns out he seemed to be telling the truth. To freak all the finalists out they went on a speed-date with Laura where she showed off her athlete's foot, hit the wine early and continued to fart. None of them were really put off by this. On the final day the three contestants were given £2 to find something for Laura. Gareth, always the charmer, came back with some lubricant and a packet of durex condoms. Later that afternoon Ben (the one who could play the accordion) was booted off, and left Shep and Gareth to fight it out. So the winner turned out to be Gareth, and he was whisked off to Paris with Laura (and er... Scott). On Monday's show we found out the date was a success, the only one feeling left out was Scott who spent the whole time moaning and looking miserable. With the dark shades and attention the French wondered if it was Chantelle and Preston. They're not 'loved up' yet, but Gareth reckons Scott should get a hat soon, and Laura's seeing him this weekend. 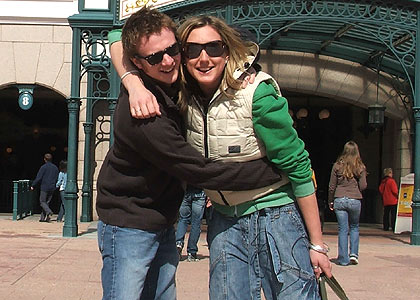 Laura and Gareth in Gay Paris
Jo Whiley Campaign
So what with One Night With Laura finished it meant some proper work from the Mills team on the second week. Chappers decided to give some airports a call to see if he could get one of them named after someone they knew. So naturally they chose Jo Whiley. By the end of that show Blackpool and Newquay airports were showing interest. The next day it wasn't looking good. Laurence Llewelyn-Bowen and Tom York also had interest in having the airport named after them. Blackpool had said no, but one of the airlines has decided they will name one of their aero planes 'Jet Jo Whiley'.
Jo Whiley: "Least it doesn't say Easy Jo"
On the final show it appeared Newquay had given in. Their new departure lounge was going to be renamed the 'Jo Whiley Departure Lounge' and they were keen on her coming down to officially open it.

Breakfast Banter (or at least some of it)
I'm not going to go through all of the discussion but here's some of the best bits...

Scott and his dad went for a meal following their birthday. Scott offered to pay for himself, his dad, his brother and his dad's wife. But as usual, things didn't go too well as he spent his birthday meal next to his dear colleague Comedy Dave. There were no other tables, so it was all a bit awkward. He was also talking about dating people from funerals - is it wrong to go out with someone and exchange numbers when one of your relatives has just died and you meet them at the wake?

Chappers was stirring up the Planet Earth fans. He doesn't see the attraction to the show (neither can I). It clashes with Poirot apparently.
Chappers - There's no new species to discover. All the animals have been found! He's been doing the same thing for years
Scott and Chappers seem to think that the animals on roller skates - possibly pandas - hide behind bushes waiting for the cameramen to go for a loo break after sitting around for several hours. After that thought Scott was struggling to cope with trying to get the image of pandas on roller skates out of his head.

The team recently noticed Chappers' has been enjoying a lot of songs on the playlist including Infernal and Girls Aloud. So Laura went off to get a hidden microphone to record Chappers. This was a funny piece of radio from Chappers singing to himself those two songs in the office. Chappers failed to see the funny side asking for it to be turned off!

Then there was a text from Martin, whose son wanted tones of barbies for his birthday. One girl’s argument is that playing with barbies is better at 5 than 16. And isn't it a bit sexist that girls can do boy things, but not the other way round? Scott said its all fine, he had a wendy house at the age of 4 and he turned out fine...

Then there was the shocking news that Martin from Eastenders was leaving.
Scott: What’s your favourite Martin Fowler moment? Mine is the ill-advised drug story when Martin was like “I’m feeling the ease-it man” and shaking the washing powder round the Launderette.

"Waxing your chest, combing your hair, even shaving your legs,
Cooking up a breakfast of sausage and fried eggs,
We wonder what you're doing, while we're singing this song,
Driving, working, brushing your teeth or maybe washing your schlong,
The Chris Moyles Show with Scott Mills ‘cos Chris is on Holiday… International Radio 1..."

Laura The Vigilante
Paul had a problem with his friend Rich who he lives with. He never gets in early, and it means not getting much sleep when he has to be at work very early. He usually brings back some friends as well, and he thinks it's just to annoy him. He's tried having a quiet work, but nothing is really working. Paul left the keys to the flat in a certain place and Scott sent Laura round. On the first day she let herself in he got the Rammstein treatment. But it didn't really work, although it did bring a lot of Rammstein fans to the show and Scott wanted to make something of it.

Ramm Ring: We saw the introduction of 'Ramm Ring' based on Chris Moyles' Sting Ring feature. Two calls in two days, where they didn't seem to appreciate the early morning call of loud German 'industrial' metal and soon slammed it down. 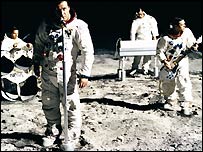 Rammstein? Ja! Mein hund ist kaput! Mein hund ist kaput!
So the second day of Laura The Vigilante and there was no more Rammstein, it was something much worse - not the Brown Noise or Chappers singing. This time it was none other than Scooter. Rich really wasn't looking too pleased with this, and on Good Friday the house was silent. So now you know, to shut someone up show some respect to the man in the ice cream van and play some Scooter.

My favourite was Posse, what's yours?
"It's 9.30am and we're here to make you smile,
Scott and the team will be here for a while,
Scott loves this time of day, to play his hit selection,
But Chappers still looks half asleep with his big... sausage sandwich,
The Chris Moyles Show with Scott Mills ‘cos Chris is on Holiday… International Radio 1..."

The Friends Phone Game
It's something BT would be proud of, Scott bringing friends together. Scott used the basis of the takeaway game (calling up two people and letting them talk to each other) and this time used two friends. It's a simple idea, but can have some funny results. The first two guys were your usual pub-stereotypes, more interested in what each other wanted than the fact neither of them had rang the other. But then Scott tried it out on Mary (off of the diary) and her friend Claire. They were totally freaked out by the whole idea of neither of them ringing each other. It was all very 'blonde' (if you excuse the stereotype there). Scott then tried to unite two friends together, but it either went on to voicemail or disconnected or something other else. One successful union between two people who weren't talking resulted in a 'f*ck off'. Nothing for Cilla Black to be proud about really.

"At last it's British Summer Time, outside it's really bright,
It's great unless you drank some cheap white wine last night,
Scott Mills did just that, he over did it a bit,
And now he'll pay the price, as he looks as rough as... Chris Moyles,
The Chris Moyles Show with Scott Mills ‘cos Chris is on Holiday… International Radio 1..."

Chappers' New Quiz Show ideas
There was no Brucie this time round, so it was down to Chappers (or Chopper as he's now known as) to come up with some new ideas. The first idea was the car alarm game. This is where Chopper goes into a car park and nudges some cars to see if they're alarmed or not. It was down to Laura and Scott to decide if they were. Not the most successful of quiz show ideas especially when BBC security are around.

After the success of the Car Alarm game, Chappers had a new game entitled Meal or No Meal, strangely enough based on Deal or No Deal. There were 6 tins, all had no labels, and one of them was dog food. Both Scott and Laura, after finding out it was dog food, didn't want to play, and they both had to be blind folded. Steak chunks, beans and fruit were in some of the tins. The game was much more successful so they brought it back on the final Friday for a second round. This time Chopper brought in some fish for the booby prize - but not just any old tinned fish - this was fish flavoured Whiskers. For the second time Laura ended up losing to Scott.

What else? There was more Flirt Divert, Scott's Sport Quiz, and Red Hot Chilli Peppers ticket giveaways. And er, discussion of Russell Grant in his pants...

That's some of the finest bits from Scott's show this fortnight, if you want to hear more or read more (and here comes the shameless plug) you can check out Unofficial Mills - The Scott Mills Fansite and if you're really bored you can tell us how much you miss Chris Moyles at breakfast.

Chris is back on Tuesday (as Monday's a bank holiday) where they've got a Take That announcement. In the meantime check out the 'Best of Moyles' weekly podcast.

Friday show is up, and Platinum: https://arc[…]