Chris is flying, as high as a kite at the start of today’s show – not like that though, that would be extremely unprofessional and entirely inappropriate. No, he is trying to get the Radio 1 Moving Desks ™ to get to the best height. They had been broken up until a few moments before the show started when a man rapidly came and tried to fix them. However, the only truly useful advise that he could offer is “they are not working properly”. Well I never. Now Chris can’t get them to the height he wants, which isn’t very high at all – which is a shame for a big lad like him.

Chris: I can’t get it up. I can’t believe I’ve just said that in front of Fearne

So, with the day’s initial double entendre out of the way, the team can safely get on with the show.

Another brief update of Radio 1 My Space happenings early on in the show today. If you still haven’t heard of this new fad, it’s where the Arctic Monkeys started off. It’s a little profile thing on the internet where you can blog, put sounds and most importantly add people to your “friends” list – I guess the idea is to make loads of friends, more than other people on the site anyway (and the team think the people on this website are sad!). 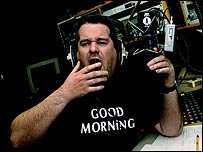 Anyway, Longman has a space up now – click <a href=”http://profile.myspace.com/longmans”> >here<</a> if you want to visit the buttylicious man himself. There are 3 pictures of Longman on there, and according to Chris these don’t put people off the thought that he is gay – what with his love of Will Young etc. In the picture, Longman is wearing a salmon shirt and white trousers against a glass wall, which doesn’t sound very masculine. I tried to look at the picture, but couldn’t do without signing up, so you’ll have to look yourself.

The Return of Jaffa (Cakes)

Rachel was upset, as someone sent in doughnuts again to the show – oh what a cruel life they lead – because they are so more-ish and are gone in an absolute instant because you just have one, then one leads to two and so on until you have eaten far too many.

Chris can relate to this, as only last night he had gotten his way through an entire pack of Jaffa cakes in just one short evening. I suppose that is better than eating a load of doughnuts though as they are more fattening per unit. Most of these cakes had been consumed whilst waiting for the kettle to boil, something I think we are all too familiar with. In this case, Chris had just popped one in his mouth to while away the boiling time, then because of their “melt in the mouth” ways he had to have another because they went so quickly. Then another one. He offered Sophie one, which she didn’t want so he had one instead. By the time the kettle had boiled, a hardcore 7 full Jaffa cakes had been eaten. Not the best of diets, but a predicament most of us have been in at some point in our lives with some kind of confectionary. 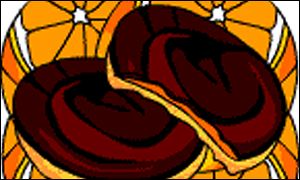 Dave was interested to know weather Chris went for the “round the rim” method when eating the cakes, but apparently he has an all new and better method of consumption – just shoving it all in your mouth at once. I think this is just as effective personally, rather than the “squirrel like” method that Dave describes.

The broom cupboard legend himself was due into the studio today, but was a bit late turning up, so to fill in time they rung Longman to sing the “Aaandi Peters” mini theme they have, as well as asking him about being “bi-focal” on his My Space (see above) and was even a Guess who for Andi later on. However, Mr. Peters did eventually turn up and wanted a demo of the moving desk – as mentioned before it was broken, but it was still enough to impress Andi, claiming it was “better than a ride at Disneyland”.

Andi didn’t really have anything to plug really, he just wanted to come in for a good natter. Did you know that he was head of pop at the BBC and invented T4? Yes, you probably did. But now he is back where he belongs, in front of the camera presenting City Hospital, which Chris loves. Don’t know how he gets to see it though as it often clashes with the end of the show. Dave didn’t know what it was about though, questioning if it covered “pets or people”. Obviously Andi is a dead ringer for Rolf Harris.

Chris said Andi is on tv so much now, he would soon get his own Channel 5 show soon, but Andi said that he would probably stop before it ever got to such extricating level. Let’s face it, what idiot would have a show…err..ahem yes. According to Chris, Dave never watched any of those shows – and he did over 60 of them. Dave said that that wasn’t fair though, he saw one or two. So did most of us I think before we realised it wasn’t that good. Although his excuse was that it “clashed…with…err…other things!”

There was also a bit of Dancing on Ice chat. Chris wanted to know if Andi had practised falling on his arse, which surprisingly he hadn’t. Chris followed this up by comparing them to JK & Joel when they won the weakest link, which Andi thought was an unfair comparison as “They are right…dumb”. Well said Andi, you certainly showed them.

The best part of the interview – for me anyway – was the broom cupboard chat and his time on CBBC. He revealed how he got in trouble once for turning the BBC globe upside down before Neighbours, which Chris said was a really boring story, but I liked it, and so did Producer Rachel. Andi also listed a few of the shows he liked, which included Rude Dog and the Dweebs (Chris : “Who remembers that?” Me, I do!), Thundercats, Byker Grove, Teenage Mutant Hero Turtles and Bucky O Hare, which Chris started to play the music to, but cruelly denied us the entire theme.
Chris asked for people to text in for Andi to introduce their favourite shows, which was a very surreal experience if you are of a certain age. I can’t really describe it in a review, but it was just brilliant, like most of the interview. It will be most likely be on this weeks podcast as well, so look out for that.

(*) Carrie was out yet again last night. She claimed that she still had a bit of a “dickie tum”, so wasn’t drinking at all. Chris begged to differ, although unlike Rachel, no breathalyser test was taken to prove this fact.

(*) There is a problem with the team paying for breakfasts. Chris, Dave and Rachel often pay for breakfast, but Dom, Carrie & Newsbeat chums don’t pay as often (cue Dom rushing in to say he paid yesterday). Rachel thinks there should be some sort of rota, but with different people having different things everyday it will be hard to enforce.

(*) Rachel started to talk about knitting, but Chris stopped he in her tracks. He doesn’t want to talk about that subject on the Radio 1 breakfast show in 2006, unless it is anti-knitting – presumably because it’s so dull.

(*) Barry was today’s caller on Celebrity Tarzan. He guessed Maggot from GLC/Celebrity BB. He was wrong

(*) Female DJs from Radio 1 past and present were all over the papers today. Firstly Jo Whiley was in the Sun looking rrrrrrrrrrrrrrrrrrrrough on holiday, and then Emma B was giving us a flash of her chest in the daily sport. Dave thought it would be a good idea to go a cut and paste job, so Jo would be flashing her boobs at us. Chris said that she was so drunk the other night she probably wouldn’t have noticed that it was fake and could have indeed happened.

Dom is taking his wife out for a romantic meal. Carrie is sourcing tiles and lino flooring. Dave is mainly sleeping. Rachel is seeing her brother Simon and his wife Stella.

Chris is going home for the rest of the weekend and enjoying some family time. Aled is celebrating his grandads 90th birthday in Aberystwyth, and Joce is having lunch with her great mate Scott the Lot aka Geordie Kid..