Here’s the deal - I have just got home for Christmas from uni and have nothing at all to do bar buy stupid presents, so I thought this might fill up my day nicely. Also, bearing in mind I haven’t listened to the show since Monday last week (the most, bar holidays, I have missed in like six years) I thought it would be nice to give it a little review on here. For those newcomers, I used to review the show up until about a year or so ago. i.e when the reviews used to get done.

Chris is on Richard and Judy today. Not sure why, presumably because they are short of guests or something. Only kidding Chris, I know you’re reading. He started the show with his impression of Judy, prompting Dave to say that she can still pull him. As in cancel him as a guest. Moyles gets his own dressing room for the show, which is tonight on Channel Four at 5 o’clock, after that Noel Edmonds show I’ve still not seen, and Countdown with Des Lynam - which again I’ve still not seen. This is the little blurb about Chris’s appearance today on Richard and Judy’s website:

“Since January of last year, Chris Moyles has ruled the morning radio roost with his “Chris Moyles Show” on Radio 1. With his Motley Crue of production staff, silly competitions, celebrity guests and controversial chat, Chris truly is the saviour of early morning radio”.

Chris said he was truly offended by the “silly competitions” line. Roy no doubt more so. He also said scrap the “early morning” bit, that was a long time ago. It’s now just “the saviour of radio”. His fellow guests tonight include Heather Mills McCartney, some guy from 80’s band Men At Work, plus Nizlopi doing JCB. Chris will probably be on the show round 20 to 6ish or just after that.

Dom was back reading the news today, after self medicating this morning and giving himself the all clear. One texter nicknamed him “Vominic”, a fairly rubbish play-on-words about the fact he was chucking up a lot yesterday, which Carrie found quite funny for some reason. Rachel is apparently ill too, yet still in work, which peed off Moyles, who did the old “if I don’t come into work I don’t get paid” line, about the fact him and Dave are freelance.

In other news, Chris’s inbox is full. Dave said more people e-mail the show than vote on X-Factor. Fact. It can’t just be me who thinks Dave would be class on “Grumpy Old Men” by the way, Today his moan of the morning was about Christmas shopping, saying the less people he is buying presents for on the show the better, as it saves him spending yet more time shopping. Moyles is of the opinion that now the show staffs so many people, it’s only the important people (i.e. him and Rach) that Dave should buy gifts for. The rest Chris said, Dom, Carrie, Joce, Tash, Rhys etc, “are just pleased to be here” - and can do secret Santa amongst themselves. Fair enough I think, although I was slightly disappointed not to hear the old tangerine story dragged out again, as the team discussed old Christmas presents they have exchanged over the years.

SHAYNE WARD ON THE SHOW:

(Who the hell took this photo? Ever heard of focus?)

Shayne Ward, winner of X-Factor was this morning’s guest between half 8 and half 9. The interview started well, with Rachel missing the cue to bring him in as the two chatted outside. He seemed a decent enough bloke, but it was your usual run-of-the-mill Moyles reality TV interview to be honest. I haven’t seen any of the series, so have to bow to Chris’s superior knowledge when he says he thinks Shayne was a deserved winner in the end. Put it this way, he’s already had a longer career than Steve Brookstein. He’s passed that difficult hour mark. Apparently Louis Walsh was on the show on Friday begging for votes for Shayne, probably to pay for his new yacht or something. Chris said Louis might let Shayne “have” one of Girls Aloud as a reward for winning, but he wouldn’t be drawn on who he’d pick. Any would do let’s face it. Shayne said he would be staying with his girlfriend and not delving into the celebrity market as it were. Chris asked if Shayne’s current missus is high maintenance or not, which Rachel (as you’d expect) got offended by. Chris said he could say that - he said his last girlfriend (aka Ana) was so high maintenance it hurt. He said the current girlfriend, Sophie, is normal to low maintenance. Dave laughed at the way he called her the “current” girlfriend, when he’s been seeing her for 3 and a half years. 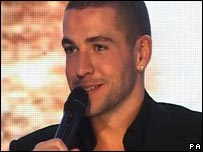 Chris adopted his rubbish Manc accent for the majority of the interview, which was mildly irritating. When he wasn’t doing that though it was better, like when him and Dave introduced Shayne’s new single in a Smashey and Nicey stylee...

Chris - Okay good morning everybody, it’s eleven minutes past the hour of 9 o’clock on Radio 1 FM.. and here’s my great mate Comedy Dave!
Dave - Hey grrreat mate Chris!
Chris - Now hey, I don’t know if you saw X-Factor on Saturday, but I was so pleased that that Shane Weird won!
Dave - I did, I voted for Shane!
Chris - I voted for him like a thousand times..

Surely a fix then right. Chris and Shayne mimed and did jazz hands when the new single was playing. How camp. Chris told Shayne to come back on the show to talk about the X-Factor tour in a few months time (really? ugh..):

Chris and Dave said they did something very exciting yesterday. But it wasn’t attend Elton and David’s stag party, where they joked they saw Scott Mills, Aled, Russell Grant, Frank Lampard, John Terry, Jose Mourinho and well.. pretty much the entire Chelsea squad - just to wind up Carrie. Nope, instead they went to Cardiff to record their Christmas Day pre-record show - from Charlotte Church’s mums pub, which will go out this Sunday morning. Listen out for some woman called Madge’s pronunciation of the word “Debenhams” by the way. Innit boyo.

Top Temperature - 13C in Falmouth
Most Sunshine - 7.4 hours in Eastbourne

Paul Turner - “Jingle bells jingle bells, jingle all the way - with Chris, Dave, Rachel, Aled, Dom and Carrie - getting you up on a cold winters day”.

Ah yes my favourite part of the show. The weekly waste of a half hour that is Rob DJ’s Monday Night Pub Quiz. Please please let this be the last one. For those of you that enjoy the local radio style battle of the sexes cheese that is this quiz, here’s how todays went:

Rachel - “an ungrateful bitch”, as Chris called her after she wouldn’t give him a clue. Ben Cooper will be pleased.

*Dave’s guess of 1 year, 3 months and 16 days for the final question meant he was the closest so got a point.

Not much in the form of Christmas music this morning - just The Darkness from Radio 1’s Xmas “Sleighlist”. Today’s panto bingo was a trip to Switzerland for a week of snowboarding action, between the 11th and 18th of March. DJ’s every night, accomodation, a free lesson with snowboarder Jenny Jones, VIP passes etc. Gilian Taylworth read the lines to listen out for today:
- ”Hi Ho Hi Ho it’s off to work we go!”
- ”Mirror, mirror on the wall”
- ”Grumpy, Sneezy and Dopey”

There was also part 2 of “A Chris Moyles Christmas Carol”, this years panto - an incredible improvement on last years, judging by this anyway. It starred only Chris and Dom today, with the latter as “the ghost of yesterday’s weather” guiding young Scrooge Moyles through his ghost of Christmas past. We took a trip to Radio TopShop in Leeds to hear 16 year old Moyles telling ladies “knickers are down”, and his first sacking at Radio Aire (with his boss played by the much missed Greyhead). We left the panto with Scrooge fast asleep dreaming of Jo Whiley. Tomorrow find out what exactly is going on in Rachel’s pantry. Aiiii.

OTHER STUFF WE LEARNED TODAY:-

- Chris saw Frank Sidebottom in 1990, and he mentioned the fact that Blackpool play at Bloomfield Road.
- Dave used to have buckled shoes as a kid.
- You can’t dial a phone with just a pen and paper, you need to use your fingers.
- Chappers sounds nothing like Father Christmas.
- Dave saw Fergie from the Black Eyed Peas on the telly the other day and thinks she looks like a cat.
- Chris hasn’t been invited to the Newsbeat Christmas party tonight, which Dom incidentally won’t be attending. Chris said all the Newsbeat people get two parties each year.
- Dave and Dom met at a Newsbeat party. Cue surreal conversation about Dom owning a market stall selling lighters. Very funny...

*Seamless link. Will follow in full on my Tedious Links page in the next few days, or when I can be arsed updating it.

There we are then. A decent show, nothing special - but as Chris would put it himself, “still better than Johnny Vaughan”.

Don’t forget Chris Moyles fans - Richard and Judy today after half 5 on Channel 4.

It's not a major issue, I can always wait until yo[…]