" "
Today's opening link in full there. Radio 2 is Europe's best radio station? What a load of crap, with quality links like that, it's international radio 1 every time.

All is revealed after a slice of Usher though - apparently the microphones were broken (yes, really) and the team had to move studios. You can tell that it was all done in a bit of a rush, as the quality was quite frankly appalling - almost like an outside broadcast. Dom was in the newsbeat studio with Carrie, Rachel was in the usual studio and Chris and Dave in this new one, so it was all a bit of a mess really.

Chris: It'll all get better from now on, trust me
Dave: I hope so!

It was clearly all Aled's fault, even though he's still in bed. He probably sabotaged it before he went home yesterday to get his own back for once, the little rascal. The text messages were in support of the team though, despite all of the problems that had hampered the opening of the show. My favourite was: "Great show this morning, best you've ever done".

Two interviews today - what a treat eh? First up was Anna Friel, who has a new movie out or something. Dom did the interview, so as you may imagine it wasn't the bog-standard affair.

The movie she is promoting is called 'Goal' (Chris: "Always believe in your sooooooul") and Rachel has been invited to the premier - she admits herself that they must be short on numbers. Dom thinks she'll like the film though, as he's seen it and he did like it. Aled was also at the interview and was very excited at meeting Anna - however when Dom introduced her, she thought his name was Alex. Aled, being the kind soul that he is, didn't correct her - so she continued to call him Alex for the duration of the interview. She should have come into the studio so she could meet "Comedy Dan".

Dom kicked off by wanting to know how to do a Geordie accent. Her helpful advice was "Byker Grove" then repeating the word "spuggy" five times. As well as that, she noted that it would be best to wear a Newcastle football top when the team do the Great North Run this weekend, because then if they faint the onlookers will be more sympathetic than if they are wearing a giant chicken costume.

It was only natural that Dom should ask about Hide & Seek at this point. She didn't sound as enthusiastic as some people have done about the idea though, with the simple phrase "why would I want to do that" being the response. She did express an interest in wanting to watch it on TV though - but when you know Flowella Benjamin will be looking for Keith Chegwin, who wouldn't want to tune in?

Nell McAndrew was the second interviewee today - she came into the studio to give the team some tips on running the run as well, since she is also competing. She wasn't that interesting, she seems pretty nice don't get me wrong, but personally I don't think she's top drawer material for cutting edge youth breakfast radio. Mostly it was just boring chat about training and stuff - Chris asked her if she could knock Dave out. She can't.

She did win "Rear of the Year" this year though - Chris wondered if the judges just stair at pictures of her arse for 4 months. She says if Dave does his squats, the he could win the award next year, following Will Young and Aled (!)

Ever wonder what 2 of the decades best "Rears of the Year" would look like together? No, well here is a pic of Nell and Aled anyway….

Other Stuff on Today's Show

(*) People can't spell Aled's name on the text messages, when trying to blame him for all sorts of wrongdoings in their lives. Someone even spelt it "eyelid".

(*) What do you wear in bed? That's what Chris and the team want to know. The boys tend to wear just boxers rather than pyjamas - they tend to be more of a girl thing, or something worn in winter more like. Chris also gave us a bit too much information by saying he walks around in his undies when he gets home from work. Dave went over for a BBQ the other day and thought it was some kind of specialist do. Later on listeners sent in pics of them in PJs (girls mainly). Didn't really work on the radio though.

(*) Wayne Rooney got a bit angry last night - and to celebrate the team took an anger management test. Rachel was up first, it was revealed she sometimes holds grudges and hurts the ones she loves in the process (including Dom). The result is that her anger is out of control and she is ruled be her emotions. In which case I'd better not slag her off in my reviews or she might try and hunt me down… 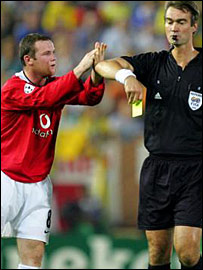 Bryan Adams- 'Run to You' - Bryan Adams is Canadian, as is Evangaline Lilly who plays Kate in 'Lost' - 'Lost in translation' was a hit for Sister Sledge, as was 'We are family', while 'Family Affair' was a hit for Mary J Blige - Blige is an anagram of Bilge which is a nautical term for a portion of a ship's hull - Hull is a city on the river Humber - If you replace the H in Humber with an L you get lumber which is region in your lower back - 'Back in the USSR' was a 1976 hit for the Beatles - the two surviving Beatles are Ringo and Paul - Ringo performed at Maida vail for Zane Lowes Legends Week, which also features performances from The Prodigy and Iron Maiden - Iron Maiden knocked us out of this years celebrity Soccer 6 tournament which was held at West Ham - West Ham beat Villa 4-0 on Monday night with an astonishing hat-trick by Marlin Hairwood - Marlin Hairwood shares the same name as Marlin Brando who is a famous actor, a bit like Kevin Kline - If you add an "in" to the start of Kline and swap the K for a C, you get incline,a word often associated with hills, of which there will be many in the Great North Run, and on Sunday on the Great North Run we will be running up that hill, which links us to Kate Bush- 'Running Up That Hill'

Chris will be watching Series 4 of 24. His cleaner is away so he might do some himself wash four or five dishes, hoover the carpet, that kind of thing.
Dave didnt get his sisters car MOTd yesterday so hes going to try again. Hell also be watching the Everton match. Dom will be putting up his sons wardrobe. Carrie will be shopping for carpet and paint. Aleds back in the gym after his injury and Rachel will be going to the premiere of Goal!

<a href="http://chris.polymathic.net/phpBB2/viewtopic.php?t=10203">>Thursday 15th September - What did you think of this show/review. Post your comments here<</a>