After the 2 days of mildly warm weather that we've been having this week, Chris and Dave both spend the night BBQ-ing last night. Not together, in fact both weren't invited to the others event. It was just BBQ for tea with family rather than the social event where all your mates come over and drink all of your beer. Plus Chris was at his girlfriend's aunt's house and Dave wouldn't have known anyone, so it'd easy to see why it would have been a bit weird when a complete stranger to most people turned up.

Chris and Dave saw a bit of lightning last night, but didn't see any rain at all, which they thought was a bit weird. Cue hundreds of text messages informing them that it was infact raining during the storms all across the country, so they had got off lightly during their BBQ-fest. Both Dave and Chris had chicken kebabs on proper skewers and everything. Chris isn't a fan with all the "muck" that goes with it though like mushrooms and peppers etc. He waits until someone else has started talking and then picks all those off one-by-one so he doesn't look ungrateful. But don't even get him started on the strawberry's and cream - he needs loads of sugar on them to even get the taste, by which point you might as well have eaten a sticky toffee pudding instead. 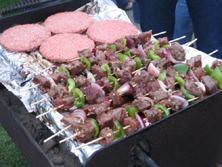 More 'Roy Walker - Legend' shirts to give away today from Aled, who was in Edinburgh. He decided to stagger them today, which is a good idea since they all went so quickly on the past few occasions they have done this feature.

For me this part of the show is incredibly hit and miss - I suppose it's at it's most interesting if Aled is in your town, so if not it kinds of ruins it if you have no idea where he's going to be or if you have no way of getting there. Also, much like Carpark Catchphrase it depends on who exactly wins the t-shirts and if they are idiots or not. Having said that the show benefits from having Aled on more, and the banter between him and the guys in the studio is often better than when he is in the studio himself.

One of the most amusing points of the Edinburgh excursion was when Aled only had a few shirts left - mostly large and so the call was for just "fatties" to find Aled. The benefits were surely two-fold with not only winning a shirt, but also loosing some weight by getting off their backsides and doing something for once. "Fatties Find Aled For Free Fun T-Shirt" is the catchy new name for this feature.

More hilarious calls from Dom today in relation to the "Celebrity Hide & Seek" feature. If you haven't been listening it's exactly what it sounds like and are dead serious about getting it on the TV. Personally I think it sounds like a whole load of crap and hope it doesn't get picked up. The chat about it is bloody brilliant though, and has been a constant highlight this week on the show, mainly due to Dom's calls.

Today he started off with Roberto from this year's Big Brother. Surprisingly Roberto had heard of it and was well up for a game of hide and seek - hopefully he'll throw spaghetti over Louie Walsh's head in a recreation of one of BB's best moments this year, but that's only if we're really lucky. "P.D." were the initials of the next potential contestant - sadly not Puff Daddy or Pete Doherty, but in fact Paul Daniels, magician bloke and "star" of Channel 5's The Farm. Paul asked the famous (apparently) Yorkshire phrase "How Much", which basically meant that he's up for it, so long as they pay him a big bundle of cash. Lisa Reilly was the last call (Dave:"She's a big star, granted"), but by this time Chris was ready to kill himself. Lisa wasn't really up for it though, as Chris said it clashed with a cake eating competition. Yes, Chris said that…

(*) Leeds signed Maradona last night, but as Dom informed us it was at one minute past midnight so it didn't count. Chris was happy that Leeds had got rid of Michael Ricketts though. 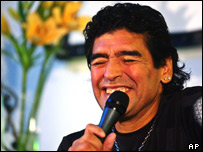 (*) Chris took the mick out of the geeks who waited all night for the new PSP. Probably one of my favourite semi-regular impressions (except when it's of people involved on this site!).

(*) A new competition where you can be involved in next week's football internationals, by watching it in the pub with Chris & co. Oh dear…"Saving our money for Germany" is the official strapline. Saving their ideas as well by the looks of it.

(*) The Battle of Hastings took place at a place called battle, which is near Hastings, but not actually in it. The team deduce that "The Battle of Battle" would sound stupid and Dom points out that "A battle near Hastings" would be more factually correct.

Fun Lovin' Criminals Scooby Snacks - Scooby Doo was mates with Thelma and Shaggy - A different Shaggy is a rapper who is mates with Rayvon, while a different Ray Von is mates with Max, Paddy and Brian Potter - Brian Potter shares the same christian name as Brian May, who is the other half of Anita Dobson - Anita Dobson played Angie in EastEnders, who was married to Den Watts, who's now brown bread again, having been buried under the cellar of the Queen Vic under a load of cement - Cement needs to be mixed, as do * - "* and Dreams" was the name of the bar that Tom Cruise's character Brian Flanagan eventually sets up in the 1988 film "*", which also starred Brian Brown - Brian Brown shares the same surname as both Jocelyn Brown and Bobby Brown, who is the husband of Whitney Houston - Houston is the home city of Beyoncé, who sort of goes out with Jay-Z, who's one of the richest and most important and influential people in the world of rap music, along with Dr Dre and Sean Puffy Combs Puff Diddy - "Diddy" is a word you'd also associate with David Hamilton, who I think still does the pitch announcements at Fulham's ground Craven Cottage - Cottage pie is something you might have for your lunch in a pub - and in a pub was where Robbie Williams was brought up in Burslem - Which links us to Robbie Williams and the classic Angels

Chris is sending his car in for a service to try and find out what a mysterious yellow warning light means he reckons about 300.
Dave will be running and watching Lost from last night. Dom will be road running. Carrie will also be running. Rachel will also be doing some form of exercise.
Aled will be going down south (ahem) to give away more T-shirts.

<a href="http://chris.polymathic.net/phpBB2/viewtopic.php?t=10103">>Thursday 1st September - What did you think of this show/review. Post your comments here<</a>