Barely a minute in, and Rachel already has had a good idea - although technically she had it last night. Since the team are always trying to wangle Friday off, why not just tape it instead - as Dave point out it'll be topical enough (who really listens to newsbeat anyway eh?) and it'll mean that the team get an extra day to add to their weekend. Result. Now all they need is someone willing to get into radio who they can bung (careful how you say that you dirty minded people) £50 a week. Who knows, if it goes well they'll just come in on a Monday and pre-record the whole weeks worth of shows.

Folk Off and School Uniform

Whilst plugging the Leeds & Reading Festivals this weekend, someone text in to Chris reminding him to big up Dave & Dom in their guise of Folkface who are playing at the weekend - a remix of the song from the dancing car advert entitled Donkey Kong. Dave said though that this wasn't necessarily the case, and he had a Folk Face announcement to do with Dom at 8 regarding this. Perhaps it's a remix of a different advert instead? There was a long 10 minutes to wait for all the Folkface fans before we would get to know.

So, shortly after 8 Dom came in with the big reveal. Chris struggled to find the right backing music at first, Doctor Who, E.R. and Whacky Races were all selected at first, but Who Wants to be a Millionaire was finally selected as the music needed for such a massive occasion.

To be honest, looking back the statement was all a blur, I tried to transcribe it - but the tears in my eyes and the frustration in my head prevented me from doing my reviewers duty. But the gist of it is this - Folkface are no more. They have split due to "musical differences but wont rule out a return to the stage at some point in the future". Dave may have a solo deal pending, but he can't talk about it for legal reasons, whilst Dom will be playing pubs in the south east for the time being. This also means that if you are going to one of the festivals this weekend, you may as well stay at home - there wont be any truly great bands that can match the might of "the face".

Later on in the show, Aled distracted Chris by walking into the studio in full school uniform. He hadn't just come in from one of those night clubs where everyone thinks it's hilarious to dress up like they are at school, even though they are 45. It's actually because it's GCSE results day (and if you are getting your results today…don't panic) - and Aled really does look like a school boy, especially with freckles drawn on his face for the occasion…

Chris wasn't getting out of it easily though, as Aled had helpfully brought in another school uniform for either Dave or Chris himself to ware to get into the GCSE spirit…

The day was proposed by Colin & Edith, and clearly Aled is getting into the spirit in full costume. Chris has to break it to him though that it was actually a wind up - as proof of none of the team actually wearing any uniform. Or was Chris actually joking himself. Sometimes it's too hard to tell.

The real reason why Chris isn't wearing uniform is he'd only found out about it this morning - what a shame. But he said that if Jo Whiley came in a school girl outfit then he would only be too pleased to play the role of school boy - and with him being 24 it wasn't too long since he was last putting it on anyway.

(*) Lost - Dom's never seen it, but reckons they're probably found rather than lost. None of the team can talk about it properly anyway as Dave is a week behind and Chris is a week ahead. Also all the American listeners have seen it anyway, so they'll be frustrated with "topical entertainment chat" that is a year old

(*) Chris and Dave went to see the Dukes of Hazzard movie yesterday. They tried to sing the theme tune, but Dave doesn't remember it as well as he does the love boat one. Dave didn't like it - he thought they changed it too much. A good excuse to use a Jessica Simpson picture though. Unfortunately couldn't find one good enough that was available for publication on a family site, or that didn't let us steal the pics like the bbc do… 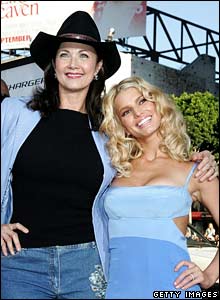 She's on the right by the way. She's actually fitter than that, especially in the film.

(*) Colin Murray couldn't say that newsreaders name, just like the team yesterday morning. I'm not even going to try to type it.

(*) Reading & Leeds festivals this weekend, and Chris and Dave unsuccessfully try to work out which bands play which days. There was also a "Beat the Intro" comp to win tickets. That was pretty bog standard and hardly worth reviewing.

All Saints - Never Ever - as well as being a popular girlband from the 90's, All Saints is a popular name for a church - Church, first name Charlotte is dating spikey-haired rugby star Gavin Henson - Gavin Henson shares the same surname as Jim Henson who created the Muppets - Muppets is the collective name for the characters Kirmit the Frog, Miss Piggy and Gonzo - Gonzo is the name of a show on MTV hosted by Zane Lowe - Zane Lowe is from New Zealand, as is Daniel Beddingfield - Daniel Beddingfield shares the same initials as Dave Bellemy, who in turn shares the same surname as Craig Bellemy - Craig Bellemy has a tattoo on his arm, as has Lenny Kravitz - Lenny Kravitz used to date Nicole Kidman and Nicole Kidman used to be married to Tom Cruise - Tom Cruise starred in "Risky Business" alongside Rebecca Demornay - Demornay is a type of sauce which is served with cod - cod is a type of fish - fish is often found on the menu in Wales and Wales is a country that has given us many good bands over the years, one of the most consistant being Feeder which links us to Feeder - Come Back Around

Chris Moyles will be getting ready for his Bank Holiday weekend, which starts tomorrow at 10.01am. Hell also be watching last nights Lost, like much of the rest of the team.
Dave will be sleeping and having dinner. Carrie might be running, playing tennis, or doing nothing. Aleds off to a birthday party and Rachel will be harvesting some tomatoes which she might bring in tomorrow! Dom will be recovering from the Folk Face news.


<a href="http://chris.polymathic.net/phpBB2/viewtopic.php?t=10047">>Thursday 25th August - What did you think of this show/review. Post your comments here<</a>