"A Thursday reviewer, doing a review on a Monday?" I hear two of you cry. Well don't worry you two, it's a one week only special offer, while Adam gets up to date and that. Anyway on with the review.

Chris starts the show off with a bit of the X-factor. We all know he's got it, but ITV have just started the first in "a 112 week run". It's truly great TV though, I have to agree. Chris puts it perfectly, the audition stages are the best with "those freaks who try so hard to entertain on a Saturday night, it's almost cringeworthy. Anyway, enough about Louis Walsh". Poor old Louis, they can't even big him up on his own show - the best they could come up with was Girls Aloud, which as Chris helpfully pointed out were formed as part of a reality show in the first place! 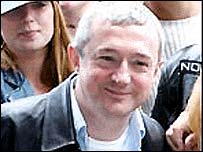 The most amusing contestant for the team, was the dairy farmer ("more like fairy farmer") who failed the first audition, then managed to get through on the second attempt when at Louis' request came back in a dress. I can't imagine Louis going for anything like that though…can you? *cough*

Chris thinks that some of the people who were at Butlins with them over the weekend should have been on X-factor, which Dave thinks is a little unfair since quite a few of them had good voices. Chris didn't mean the participants though, more the people who came to watch the stage show - most of them "looked like the night of the living dead", so perfect to go with the inventor who thinks he's resurrected John Lennon and the fairy dairy farmer then.

The crowd really were that bad apparently, although I'm sure that it wouldn't have helped that half of the crowd there didn't even know who "Chris Moyles" was. The crowd were so entertained that at one point Dave cracked up laughing mid-link as a woman right in front of them let out a massive yawn. She must have been having the holiday of a lifetime.

Everyone has been coming up and laughing at Chris this weekend, asking how Butlins was. Although their intentions may have been cruel, Chris seemed to have had a genuinely good time. He was naturally annoyed at how the redcoats had complained at the Hi-di-hi jokes all week though; after all it's only a bit of a laugh. Still, they weren't having any of it and told him to cut it out, which is a bit rich as "some would say you've had a free bloody advert on national radio all week". To be fair though, the woman who was giving them grief was in all likelihood getting in the neck herself from the bosses higher up in Butlins, and Chris feels a bit sorry for her. The crowd at Butlins love all the hi-di-hi stuff so his advice is for them to bring all that back, then they might get a few more customers in the door. In fact it was the only thing that got a response at the karaoke night!

Chris had to say something nice about Butlins though - the spa "was mega" Dave said, and Rachel was so impressed with it that "when you're in there, you almost forget where you are". One for the front of next year's brochure there.

2 games played for Chelsea this season, two lucky escapes. Except fans like Carrie are just deluding themselves thinking that's the way how champions win, rather than the way crap teams win. Leeds used to score goals like Chelsea have over the past two games, so if I were Carrie I'd be worried.

It was good news all around for the teams…err…teams this week then, as they all won - yep even Leeds. Chris is getting a bit stressed with the Championship now - he needs to see premiership action as soon as possible. He can't even begin to understand how Rachel feels supporting Kidderminster.

Rachel: Well, the only way is up
Dave: It is when you're in the conference, you can't go any lower
[Laughs as Chris Plays Jingle]

Thierry Henry was making the Chelsea players laugh before the big game yesterday in the tunnel on Sky, which Chris thinks is probably some kind of saucy gag to lighten the mood between them. The commentators obviously haven't seen this, describing the atmosphere in the tunnel as one, which is hardened and tense. 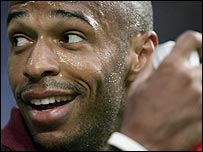 Thierry was probably asking Chelsea if they wanted a bit of Va-Va-Voom, which prompted Dave to ask who the heck is the famous "bobby" anyway. Chris said he'd heard it's Henry's wife, but now expects 500 text messages correcting him from all the smart-arses with credit to waste texting Radio 1.

Bobby Ewing and Bobby Davro were some of the suggestions on the text, but the overwhelming response is Bobby Pirez, who was in the first advert so I guess that would make sense. Now that is solved, Dave has a new conundrum. Why is Thierry, who as far as Dave is aware, speaks fluent French asking someone else what "the French for Va Va Voom" is? Chris doesn't know - he's still laughing at Bobby Davro. At least someone is.

(*) Chris thinks Kelly Holmes should stop "bigging herself up". She won two medals. Woop-de-do. She should stop going on about it now. Sorry - how many sporting medals do you have Chris?! Although he does also think Steve Redgrave is dull, which I can agree with so I forgive him. Sports Personality…ha that was a joke the year he won that.

(*) Clips from the Kareoke on Thursday night, which I'm sure were played on Friday's show. Still, gives me an excuse to post this picture which looks like Dom and Carrie doing stand up comedy. "Err..no, no, no, no errr, no"

(*) You may have seen Chris on the BBC football advert over the weekend. During filming he said that Colin whacked the ball in his "Davina Mcall's" which at the time the director thought was brilliant. However they didn't use it…probably didn't have the balls.

(*) Chris is on another fitness drive. Bets now open to how long that will last. Moderation in Moderation folks.

(*) Aled is doing his first ever Radio 1 Show solo. Tune in, in the middle of the night tomorrow if you speak welsh.

(*) Rachel has been growing her own tomatoes and sampled her first produce at the weekend. Aww Bless. After the success (what?) of the text poll last time this was mentioned - they wasted more time by doing another one. Jonny Vaughn is crapping himself.

Cliff Richard - Summer Holiday - Cliff Richards is mates with Sue Barker - Sue Barker shares the same last name as Ronnie Barker who starred in 'Open All Hours' alongside David Jason who went on to do 'Only Fools & Horses' and 'A Touch Of Frost' - Frost, first name Jenny used to be in Atomic Kitten alongside Natasha Hamilton who has a baby with Celebrity Love Island Star Fran Cosgrave - Fran Cosgrave shares initials with Frank Carson and Fearn Cotton - Fearn Cotton and Reggie Yates present Top Of The Pops and have just been signed up to present on Radio 1 - Radio 1 is now truly global and broadcasts live around the world - the world is another way of describing planet Earth - Planet Earth was the first single for Duran Duran - Duran Duran are fronted by Mr Simon Le Bon - Bon in French means good, whilst Bonbon is actually a sweet - 'Life Is Sweet' was a 1995 hit for the Chemical Brothers - The Chemical Brothers have collaborated with many artists over the years such as Noel Gallagher who provided the vocals on 'Let Forever Be' which links us to Chemical Brothers - 'Let Forever Be'

Chris is going to challenge a fellow Radio 1 DJ to play some video games, and will then be trying to start his new get healthy regime.
Dave is going to tidy his spare room. Its his favourite room in the house.
Dom is going the gym and is aiming to run 6 miles. Carrie and Rachel are meeting up for a run as well. Aled is going to the doctors and Jocelin has got some ironing to do

<a href="http://chris.polymathic.net/phpBB2/viewtopic.php?t=10047">>Monday 22nd August - What did you think of this show/review. Post your comments here<</a>

Friday show is up, and Platinum: https://arc[…]