Chris is nervous today, and not because it's A-level results day - oh no. He's expecting a very important phone call today after "the result" last night (that's football for those of you like me who couldn't give a crap). He's the obvious choice, as the FA will want to go for a true Englishman this time around, as well as somebody who is relatively unknown for that surprise factor. Although it would show how fickle football really is if England sacked their manager because they lost a friendly, but that's just me… 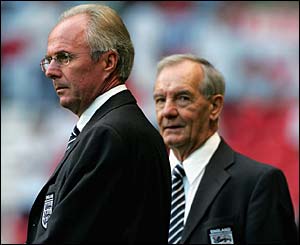 Chris then promised to ban football from the show, so as not to alienate all the football fans. Naturally this meant that he chatted about football for the next 15 minutes. Hopefully they'll be getting Sven on the show when he's been <s>evicted</s> fired from his job - first getting in interview with him at the press conference with "International Football Aled".

As you may have heard, the team are off to good old Skeggy tonight in preparation for tomorrow's Summer Friday Thing. Although Dave was a bit weary at first, he'd heard good things about the Butlins there from his taxi driver this morning, as it was where he lost his virginity. Chris was naturally concerned about this and said he'll have a look in the lost and found tomorrow.

The team naturally sound really excited by the prospect of their trip out, especially after the rip roaring success of them on a barge and Colin & Edith at St. Andrews. Chris has an idea to make the Friday Thing even better for next year though, to cater for the stations richer listeners who go to Dubai, Miami etc. Perhaps even a trip round the world like on the National Lottery Jet Set - of course they'd have to take some listeners to justify it but they could defiantly make it work.

Carrie can't wait to get there so she can enjoy the Spa, although disappointingly not the chain of local shops. Dom however has never been to a camp like this before so he's just looking forward to arriving. The team have also been told to bring their swimwear for the trip, because there is a "cold shower scinario", as Dave calls it. This involves a rope and a bucket full of cold water, although this just sounds like Butlins being extremely cheap and not bothering to install modern body cleaning facilities.

Dave will become a redcoat later today at the resort, following in the footsteps of such famous success stories as Shane Richie and….errm… Michael Barrymore. Originally the team were going to pick Aled for the task, but he would probably have enjoyed it too much so Dave has been picked.

As part of his duties Dave will have to do the "Billy Walk" with Butlins mascot Billy the bear, who looks like this,

He's clearly the new sensation across the nation, and Dave will be performing a wonderful dance routine in front of lots of happy holiday makers tomorrow morning - as well as millions of sleepy listeners on national radio. I bet he can't wait. There was a special preview this morning as Dave rehearsed the legendary song, although he didn't sound like he was trying too hard - the redcoats wont stand for that tomorrow, so he'll have to buck his ideas up if he want to impress the mighty Billy.

(*) Even better than that…Karaoke Tickets Giveaway!!!!

(*) Exam results talk - if you didn't do too well then don't worry, One Life can help along with Scott Mills and his best Tony Blair impression. If you did do well, then congratulations to you.

(*) Chris had a guess who - but it was the shortest one ever as Dave guessed it straight away. It was Ricky "Extras" Gervais

(*) A new parody - this time the Kaiser Chiefs get the Moyles treatment. Don't worry if you missed out, it's on the message board. Just click here

Foo Fighters - Everlong - The drummer from the Foo Fighters is called Taylor - Taylor is the surname that links 3 of the original members of Duran Duran even though none of them are actually related - if you swap the first letter of related for a 'b' you get belated which is associated with greeting cards which are late - late has the general meaning of the word 'tardy' - tardy rhymes with mardy which is another word for grumpy - Grumpy is one of the 7 dwarfs that hung out with Snow White - Snow White shares the same last name as Jimmy White who recently changed his surname to Brown as part of a corporate promotion for a well known brand of sauce - Sauce featuring Candy Statton had a big hit with "You Got The Love" - "Love Me Tender" was a hit for Elvis Presley who shared a surname with Pricilla Presley who starred in the Naked Gun movies alongside Leslie Neilson - Leslie Neilson shares the same Christian name as Leslie Grantham who has a webcam like Chris Moyles - Chris Moyles has met lots of famous personalities over the years including Mark Owen and Robbie Williams who used to be in a band called Take That which links us to Take That - Back For Good.

An A-Level Carpark Catchphrase Special
Anna who wants to go to Oxford (wooooooo!) (2) beat
Ross who doesn't care what he gets in his results - he's off travelling (1)

There was no Mini-Moyles update today - the team are too busy at butlins I bet, so this is basically just using up precious review page space.

<a href="http://chris.polymathic.net/phpBB2/viewtopic.php?t=9992">>Thursday 17th August - What did you think of this show/review. Post your comments here<</a>