Rhod Gilbert's best bits - I like his stand-up shows. His podcast is very much a case of "Marmite"

The infinite monkey cage podcast - I like the serious & comedy crossover conversations about relevant (and sometimes unthought about) issues.

KISS breakfast podcast - I only stumbled across this a few days ago but soo far soo good. I will admit to listening to one a week being about right though.
"Goodbye Great Britain"
Chris Moyles final words on BBC Radio 1 (Friday 14th September 2012)

Nicola_Red wrote:This is now three podcast-related threads merged, just in case anyone is confused. The discussion all follows on quite nicely though.

JayE wrote:The Xfm Breakfast Show with Jon Holmes (Probably my favourite Podcast ever at the moment.)

I meant that it's my favourite podcast ever but I could find something I like better one day.

Nicola_Red wrote:This is now three podcast-related threads merged, just in case anyone is confused. The discussion all follows on quite nicely though.

Check Out Ben and I's New Podcast "Crack And Batter"

On topic, I don't listen to any podcasts. Not being an iTunes user, it rarely occurs to me to search them out. I do have all the old Radio 2 Russell Brand podcasts saved, but I haven't listened to them in ages. Mr Red is a devotee of all Kevin Smith related podcasts though, and will regularly start chattering about something he's heard on Hollywood Babble-on or whatever. I don't really enjoy what I've heard of them, but some of the news-related topics they discuss do provide a good starting point for debates.

ETA: I was also a devotee of the Lost podcast from Channel 4 which became the Lost Initiative when it moved to Sky. I've still got all those saved too. I wasn't so much a fan when it became video (vodcast?) though, much preferred audio only. I have very distinct memories of walking to my tram from work with the start of the podcast - Desmond reciting the numbers and the dramatic music - playing in my earphones. Ah, I miss Lost.

Anyone got some good comedy suggestions? (NOT Ricky Gervais) - preferably around 45 mins - 1 hour.

By JayE -  Sat Mar 08, 2014 2:56 pm
-  Sat Mar 08, 2014 2:56 pm #502426
On various other forums I post on I notice they have Podcast Networks on where users on the forum present their own podcast and post the downloads in the thread for their podcast so others can listen and comment. I was wondering if that could be something anyone would wanna do on here. Just an idea.

I meant new stuff specifically for the chrismoyles.net community. But it's just an idea, I never said it would be a good one.

I was actually thinking of asking people here if they want to join in, but I thought maybe I'd let it bed in a bit, as it's very new and still in the "teething" stage.

This is self-promotion, but only after someone else brought this very specific concept up here...

The last one we did was for Star Wars and I think it's the most entertaining one so far. Joining my regular guests were two people (age 29 and 32) who had never seen Star Wars before. Hilarity ensued!

On a Very Special Episode of DFSMC, we are joined by Special Guests LovelineFan and SharonNeedles. Until this week, neither of them had seen Star Wars! Hijinks ensue. 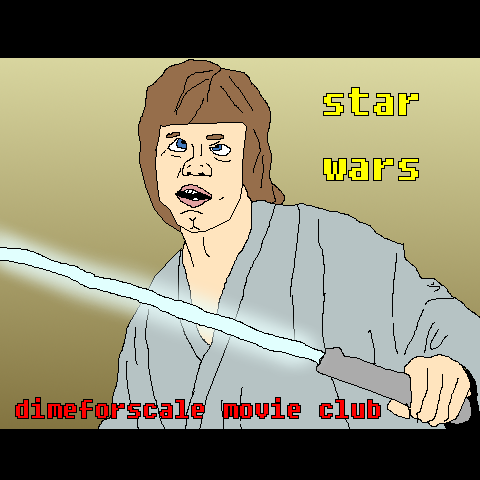 
Also on today's show
* We have a very brief visit from an actual Wookie
* Furry Ewoks
* LULLF reveals he arrived in a time machine from 1985
* The Millennium Fowl-Can
* PG-13 ratings: "One * and couple of shits"
* The Death Star's Interior Designer
* Hot behind the scenes action during the show interval
* The Jackie Chan OUTRAGE!
* Urban confusion
* LULLF's reverse-movie-learnin'
* Ovarian Cysts

You do a podcast?

You do a podcast?

Yes it's called Each To Their Own with JayE.
I am the meat

You should do a chrismoyles.net "board podcast" like the ones you mentioned.

I can also confirm I have listened to said podcast.

But I'll give it this, I listened to it until the end.

Much more time than I've given to established podcasters.

So keep up the good work kid. I'm now off to finish my 12 box of bottled Stella.

Check Out Ben and I's New Podcast "Crack And Batter"

Having said that, if I can offer some constructive criticism:

What's all the banging and noises and clicks going on at the beginning there? I'm really strict with the people on my pod and try to make sure they don't whack the microphone or do other silly things during the show.

You can just cut out the sound checks at the beginning. There's some noise I can hear. You can use Audacity to reduce noise. I've had major problems in the past, and it can be tricky. You may also want to look at distance from the microphone and/or gain.
I have difficulties with this, but I'm working on it.

Why is it only 20 minutes? I think my pod is too long -- we spend too long on the quiz part, but we enjoy it, so I just leave it all in.

The guy at the other end's audio is really bad. I can't work out what he's saying 1/2 the time. If it's bad, I get them to hang up and call back in. Is he using Skype?

Some of the stuff I use to do my pod (real-time and in the edit):

Blue Yeti USB mic (only two of us have this, but it's good value)
Skype
Voicemeeter -- for mixing audio over Skype
Audacity -- for recording and editing
Levelator -- for levelling audio
SoundPlant -- for playing out audio drops and clips

The clicking is probably us typing.

It's 20 minutes because on the website we broadcast on we can stream it LIVE and we also play music and there is a half hour time limit! I then edit the music out and upload it as a podcast on iTunes.

Yeah it's through skype I put my mic up to my bad ass speakers which I'm starting to realise probably aren't as bad ass as I first thought.

I'm really thinking of quitting broadcasting on the website and just record it with my own software so that there are no time limits. I did install Mixcraft quite recently which is a two track editing thingy, but I only had a 30 day trial.

I'll find something else.

Thanks for the criticism Neil. I shall give your podcast a listen today as I said I would a couple of weeks ago but I then forgot.

If you listen to mine, let me know what you think! If you only listen to one, I suggest listening to the Star Wars one. We had a lot of fun with that one.

ETA: I don't think your pod is rubbish, but there are some technical things you can do that will help. The content is always the most important thing, in any case.